The Washington metropolitan region’s first Transitway is one year young today and cruising along.

Arlington opened its section of the Crystal City Potomac Yard Transitway on April 17, 2016, and thousands of bus riders are enjoying a faster trip wherever they’re headed.

A joint project with the City of Alexandria, the 4.5-mile Transitway runs between the Crystal City and Braddock Road Metrorail stations. It uses a mix of exclusive and rush hour bus lanes to provide more reliable transit service along the congested Route 1 corridor, offering station amenities like real-time bus arrival information and a higher curb for easier boarding.

WMATA’s premium service Metroway is the only bus line that runs along the entire Transitway. Arlington Transit and Metrobuses use some Transitway stations in Crystal City.

First year by the numbers: 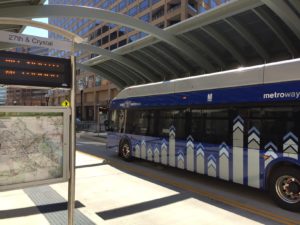 Sunny Side Up: Plugging in with Arlington Solar Co-op

Arlington's Rethink Energy Team is partnering with VA SUN and Arlingtonians for a Clean Environment to launch a 2017 solar...