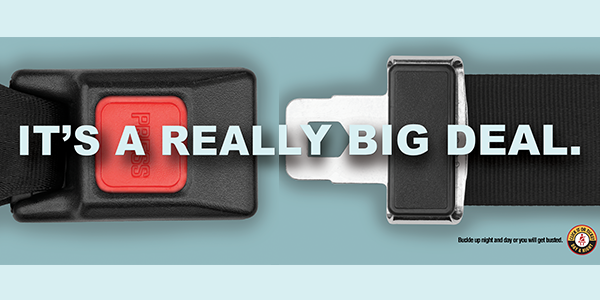 ARLINGTON, Va. – With Thanksgiving being one of the busiest travel times of the year, the chances of being involved in a crash are greatly increased due to the number of vehicles on the roadways. Everyone wants you to get to the Thanksgiving table safely, so it’s critical to practice safe driving habits, like buckling your seat belt. During the Thanksgiving holiday, Arlington County Police Department is teaming up with the U.S. Department of Transportation’s National Highway Traffic Safety Administration (NHTSA) on a high-visibility Click It or Ticket enforcement campaign to work toward reducing the number of fatalities that occur when drivers and passengers fail to buckle up. The campaign runs from November 25 – December 6, 2019.

According to NHTSA, 365 people were killed in motor vehicle crashes nationwide during the 2017 Thanksgiving weekend (6 p.m. Wednesday, November 22, to 5:59 a.m. Monday, November 27). Nighttime proved even more deadly, with 57% of Thanksgiving weekend crashes occurring at night. Wearing a seat belt is the single most effective thing anyone can do to prevent injury or death in a vehicle crash. The Click It or Ticket campaign combines powerful messages about seat belt safety with increased patrolling for all unbuckled motorists.

Virginia law requires everyone under age 18 to be properly secured in a safety belt or child safety seat no matter where they are sitting in the vehicle, and the driver is responsible for making sure this happens. In addition, Virginia law requires everyone in the front seat of vehicles to be properly restrained, regardless of age, and those 18 and older can be ticketed.

Arlington to Increase Speeding Fines in Some Residential Neighborhoods

The Arlington County Police Department will conduct road closures on the morning of Saturday, November 23, 2019 for the 5th...