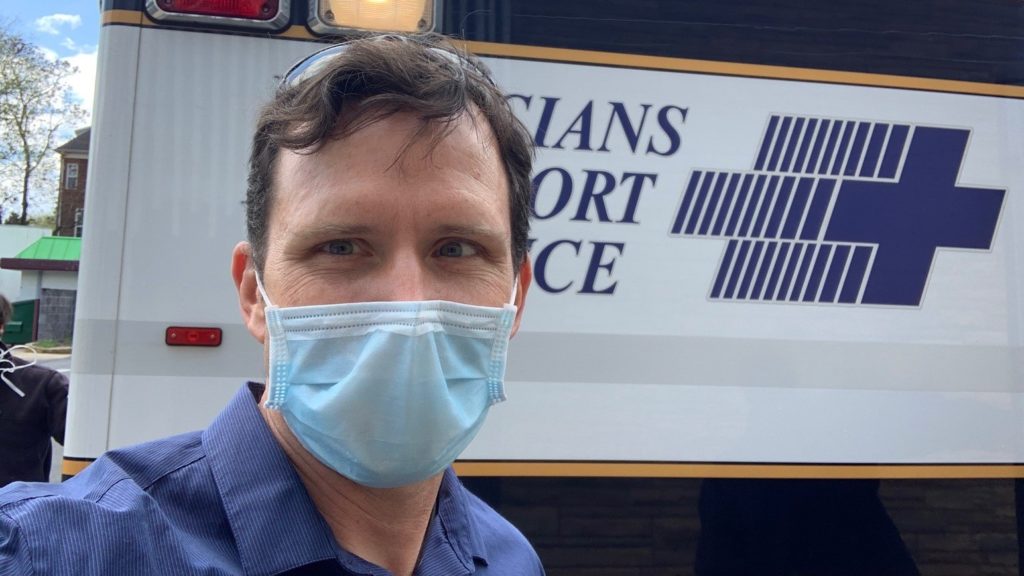 When the COVID-19 pandemic hit in early March, retired U.S. Air Force Colonel David Ashley quickly found his planned spring and summer mountain climbing trips canceled. He spent about a week doing projects around his Arlington home, but after 27 years in the military, he realized he need something else, something with more purpose.

He registered to volunteer with Team Rubicon for military veterans and the Virginia Medical Reserve Corps (VMRC)—pledging to take work with whichever group responded first. The VMRC emailed him almost immediately with an opportunity with the Arlington County Department of Human Services (DHS).

“I really feel passionately that when our country needs us, you step forward,” Ashley said. “Especially when things are dangerous.”

The chance to work in Arlington—where he and his family have lived three times during his career—was particularly important. “I wanted to feel more a part of my community for the first time in my life.”

Ashley was assigned to work at a hotel Arlington County had temporarily leased with to serve high-risk homeless people and those who needed a place to isolate. He and the other volunteers served as client services front desk staff, working eight-hour shifts.

As the number of clients ramped up and Arlington prepared to open a second hotel, County staff approached Ashley to help with training volunteers and overall operations of the sites. He was hired as a temporary County employee in late April and worked at the hotels until late June.

“I really feel passionately that when our country needs us, you step forward,” Ashley said. “Especially when things are dangerous.”

Often that work boiled down to simple, everyday tasks.

“For those who were COVID positive, they couldn’t leave their rooms, so we worked to get them whatever they needed—within reason—as quickly as possible,” Ashley said. “For those that were high-risk, they had the right to come and go, so our biggest concern was if they came into contact with someone who was positive. We would provide PPE and remind them to wash hands.”

Volunteers also assisted with communication, whether that was getting people in contact with their families or helping them connect with County services they needed, such as rental assistance or DHS appointments.

“The County had people on call 24/7, people who already worked full time and were doing this in addition to their regular responsibilities,” Ashley said. “We couldn’t have succeeded in our mission without that additional support from the County.”

Ashley said he and the other volunteers were always focused on that mission: Keeping the residents of Arlington County safe and helping homeless people who are at risk. And he believes that help went beyond the pandemic.

“You’re responding immediately to people from the homeless community who normally don’t have that option. They could pick up the phone and get what they needed,” he said. “I think we really touched some hearts. We had many conversations with our clients and there was some mentoring that was happening.”

Mentoring comes naturally to Ashley, who volunteers with Purple Heart Summits, a program that combines mentoring combat-wounded veterans with mountain climbing. So does donation. Ashley is a living organ donor; he donated a kidney to a West Point classmate in 2017.

It was a natural step for him to donate all the money he earned as a temporary County employee to Purple Heart Summits.

“I’m fortunate that I did not need the income,” he said. “And I want to raise awareness with people that donating an organ doesn’t mean that your life has to be different afterwards. You can save someone’s life and still continue with yours—you can still continue to serve.”

How to Prepare for Tropical Storm Isaias

As Tropical Storm Isaias draws closer to our region, the Arlington County Department of Public Safety Communications and Emergency Management (DPSCEM) is...