Almost 18 months ago, in April 2019, in what now seems like a lifetime ago, we announced the formation of the Complete Count Committee for the 2020 Census. In rolling out this effort we emphasized the importance of the census – it is a key tool to ensure Arlington’s fiscal health as it helps determine how much federal funding comes to the County. It ensures that the County gains its rightful representation in Congress as the population totals are used to apportion seats in the House of Representatives.

Making sure everyone is counted is a solemn obligation laid out by the Constitution (Article 1, Section 2 as amended). A census is not new to us in the course of human history. In Exodus, the second book of the Old Testament, we see first mention of a census. The Book of Numbers and several other places in the Bible speak of counts of the people. Many censuses were done to assess the military strength of a nation, and it wasn’t until much later in history that women and children were included.

The census is also a snapshot in time. It tells us much about the place it counts. For Arlington, or more specifically Alexandria County, looking to the 1920 census gives us an opportunity to see who was living here, how they lived, where they worked, and where they were from.

As a genealogist, the lure of the 100-year celebration of Arlington and the ongoing focus on the 2020 census became a happy coincidence where my job and my hobby intersected. I was quite familiar with the 1920 census, having used it for many years to assist in my family history research. Given this, I embarked on a project to pull together a full copy of the 1920 census for Arlington as a first step to see where we were, and to compare it with where we are now as a community.

As with most things, nothing is ever as simple as we first think. In December 2019, I began looking at the 1920 census that was available online. Alexandria County was split into six different census enumeration districts with well over 300 separate sheets filled out by hand by census takers. My goal was to find information that summarized demographic data for Arlington in 1920. A review of Fast Facts (Census Bureau materials) and historical analyses by County staff offered some details, such as population, but the level of rich detail needed to paint a full picture of the County 100 years ago was missing.

Given this, in what seemed like a simple step, I decided to download the census data and create a spreadsheet with all the details that could be gleaned from the census sheets. A number of websites, including www.ancestry.com and www.familysearch.org along with the National Archives have access to the data. Unfortunately, the only data that could be copied into a spreadsheet was only a partial transcription that left many pieces of critical information unavailable.[1] Accordingly, I embarked on completing the spreadsheet myself.[2]

For each line of data, I added the missing information. Working with the original census sheets proved difficult. Relying on the handwriting of the census takers was a hit or miss proposition. It soon became clear that the information that I had imported into the spreadsheet with critical data such as names and addresses had been transcribed inaccurately, and in many cases the original writing was far too difficult to make out. In a mounting series of challenges, it became clear that some of the enumerators didn’t do their jobs correctly. Many of the census sheets simply did not have street names and dwelling numbers included.

The project now was quite different than what I had planned. While I had a good portion of underlying data for many Arlington residents in 1920, I had to literally reconstruct many of the missing pieces one by one. In some cases that meant looking at data under the same names for 1910 and 1930 censuses. A good bit of time was spent inspecting death certificates and enlistment forms for World War 1 draftees.

In what can best be described as a game of multi-dimensional chess, pieces of data needed to be compared. In a bonus challenge, trying to use logic to think through where people lived in 1920 was made more difficult by the fact that almost every street name I am familiar with having lived in Arlington for over 35 years were not the names in place in 1920. While I had images from multiple censuses up on computer screens, sitting in front of me in paper form was the exhaustively researched material prepared by the Arlington Center for Local History to help navigate through the street name changes that happened in 1932. While names from 1920 like Glebe Road seemed familiar, streets with names like Preston Avenue and Malvern Avenue mean very little to us today.

This effort has resulted in the best, and only source of all the names and details of Arlingtonians from 1920. The analysis of the 280 separate sheets completed from enumerators – still needs some small improvements, but we have more than enough to finally tell the story.[3]

On January 2, 1920, the first enumerators began their work. The January 2, 1920 edition of the Alexandria Gazette announced the beginning of the visits from census takers. The instructions for the enumerators were laid out over 58 pages.[4] The enumerators asked a series of questions and then completed census sheets.

A sample of one of those sheets follows (click image to enlarge): 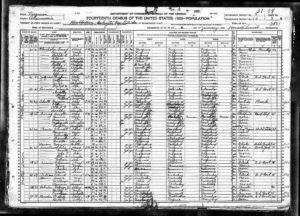 Sheet 3A from the Arlington Magisterial District, covering Veitch Avenue and Reston Avenue [5]

Enumerators worked to compile the data across the six enumeration districts (EDs) in the County. Those districts, like census tracts we use today, covered all present-day Arlington and included a portion of Alexandria City.[6] The summary of Arlington’s population as reflected in the report analyzing all 1920 census results in Virginia showed Alexandria County’s population totaling 16,040 residents. Of those, 2,228 lived in what is now Alexandria City.[7]

By the time of the 1930 census, the portion of Alexandria City that had been part of Arlington in 1920 was gone. What happened? The history of the County’s boundary changes is best described in an analysis produced in 1969 by one of my predecessors, Bert Johnson. Mr. Johnson served as County Manager from 1962 to 1976. In 1969, he updated a full history of the boundary changes affecting Arlington County.[8] As the 1920s ended, Alexandria swept what is now Del Ray and its environs into the City’s boundaries.[9] Changes to Arlington County’s boundaries did not stop in 1929 but continued for many more years.

To provide the best comparisons possible, I decided to focus on the 13,812 individuals captured by the enumerators in the five, not six, census areas that comprise modern day Arlington. To ensure that none of the streets included in Enumeration District 13 were still a part of modern-day Arlington, staff at the Center for Local History reviewed each street. [10] 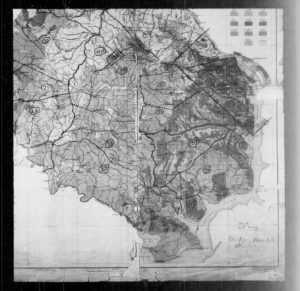 So … what does the information tell us? As you can see from the attached spreadsheet, 1920 Arlington[11] and 2020 Arlington vary in some significant ways. The main take-aways include:

WATCH: Video of Mark Schwartz sharing a guided tour of census data and research from 1920.

PRESENTATION: A Peek at the Census, Celebrating Arlington Then and Now, by County Manager Mark Schwartz

Finally, before we embark on a visual tour of 1920 Arlington a quick review of names is important. The question of how and why we named certain schools, buildings and streets has taken on great prominence during the summer of 2020. Two years ago, the Arlington County School Board changed the name of Washington-Lee High School to Washington-Liberty, and we have now committed to coming up with a new process to review names and to replace the current County seal and logo. Many of the street names we are most familiar with are names that appear multiple times in the 1920 census. For example:

I want to thank the talented staff who did most of the work in preparing the material you are about to see, and who assisted in what you just read.[12]

In the accompanying story book, prepared on the 1920 census, you will see much more detail on the history of Arlington – then, and now. Thank you.

If you have feedback or contributions to this project, email census1920@arlingtonva.us

[2] Under Federal law, all census results are kept confidential until 72 years after being collected. The 1920 census was first available in 1992. The transcription likely took place in the early 2000s when the presence of census data became an important part of online genealogy databases.

[3] The spreadsheet is available for viewing at https://topics.arlingtonva.us/census-2020/1920-2020/  As people take the time to review the sheet and have suggested changes in names, please send that information to census1920@arlingtonva.us

[5] The full set of 1920 census sheets can be viewed by going to https://www.archives.gov/research/genealogy/census/online-resources

District 0013: Jefferson Magisterial District (part) including Potomac Town and Alexandria City Almshouse and Workhouse, all South of or below the Bluemont Branch of the Southern Railway

District 0014: Jefferson Magisterial District (part) excluding Potomac Town, all north or above the Bluemont Branch of the Southern Railway

[8] http://www.gutenberg.org/files/36902/36902-h/36902-h.htm. The details covered begin with the charters of King James I, all the way through the accretions to Alexandria and the Boundary Commission to settle the Arlington/District of Columbia boundary – through 1945. An update of this history is on my current “to do” list of items to complete once we get past the current pandemic.

[9] Text of the order of the Supreme Court of Appeals setting the area to be annexed by Alexandria as of December 31, 1929:

[11] All the data comparisons are based on the 13,812 from the five enumeration districts that are part of current day Arlington.

County Manager Mark Schwartz will share insights into the 1920 Census data and reflect on the changes in Arlington over the...